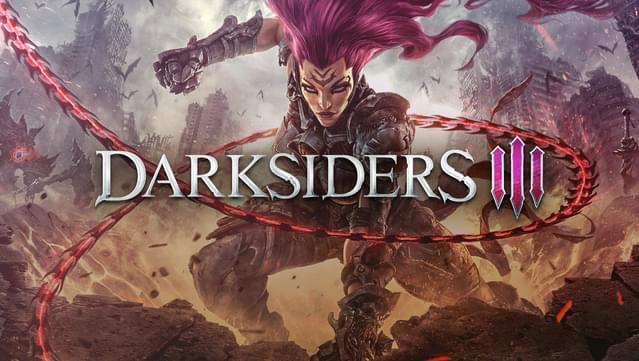 The Darksiders series represents is almost the very definition of the term ‘Jack of all Trades, Master of None’. Though to many it’s known as the grown up Legend of Zelda after the first game in the series copying many of the standard game play designs synonymous with that series. Though in actuality it incorporated various different aspects of many different games on top of the core Zelda experience; platforming, climbing, twitch based Devil May Cry style action, MetroidVania exploration and even elements of Portal.

Darksiders II built upon that, swapping out many elements to carve it’s own unique path but following the core template. Being more of an open world, loot based experience. However what this adds up to is each game in the series being something unique, as much as the main character who’s swapped out in each game. You always play as one of the Four Horseman of the Apocalypse; First War, then Death and now Fury (This series swapping the traditional Famine and Pestilence for Fury and Strife)

In one was Darksiders III looks to depart from the Zelda template in favor of a more SoulsBorn (Derived from the slow and difficult precision game play and adventure from Dark Souls and Bloodborne) style of an adventure. Which for reasons I’m going to explain I’m ambivalent about, as I feel its a bad step for the series, while possibly being the correct move for the character Fury herself.

I’m not sure this direction was completely intentional. As an aside for a bit of history the first two Darksiders were made by Vigil Games under THQ. They had fairly big budgets and the long development time between the first two games allowed the series to gain traction so the second game arrived to a lot of fan fare but not incredible sales. Along with other series under performing THQ went under and the rights to the Darksiders series were sold off, though by a stroke of fortune the third Darksiders game would still be developed by many of the same team the budget seems to have been reduced and the scope of it’s world with it to something more in line with expectations.

To this effect Darksiders III seems lacking in more than a few ways, but while some are written around in game cleverly threes no reason for other missing features given. Fury is introduced from the first moment as the weakest of the Horsemen, so in the narrative it makes sense that even the grunts can kill you easily Darksiders has always been about the power of the Horsemen, and it seems to betray their power being so powerless. She also has lesser physical ability then her Brothers, with climbing and general traversal limited to jumping (until given other skills mid game). This seems to put Fury on a much lesser footage and hamstrings the available options in the game for you.. though it also by necessity means there’s less to worry abotu when making the game as it gives it a much smaller scope.

Counter to these points however the lesser scope has resulted in a more curated experience when it comes to the overall world. Like the first Dark Souls the world is fully interconnected and while you’ll find your self coming back and forth multiple times in the game the routes you take will seldom be the same until late game question, though even then there are far more secrets to be found on the journey. Its not Dark Souls completely as you’ll have various checkpoints to re spawn at and the game always pushes you forward instead to returning to a fixed area. Also it seems like souls lost can always be recovered for the few times I did die more then once.

However the true defining factor of the Darksiders series for me if the horses the Horsemen ride, in the original game War re-obtaining his horse and the game presenting you with a wide open area was a surprise and mixed up the game play. While in the second Deaths’s horse if with you from the offset and the open world game is designed around it. In Fury’s case however your introduced to her horse before it’s killed off screen and used as a plot device. I can understand the choice but it again is contrary to what I believe the core Darksiders experience should be and forces the game a more streamlined experience compared to the other entries in the series.

Fury herself lives up to her name, with anger being her primary trait naturally she’s cold and standoffish towards anyone with the exception of her horse that for the short time that you see them together shows she has a loving side that is mostly hidden from anyone else, even her Horseman Brothers. The journey however beings to give her some humility and unlike the previous protagonists driven never really grew as characters during their games this shift is a welcome change for the series. Using what I’m sure is a much light budget compared to the previous games it’s much easier to craft a more personal story then it is a grand open adventure and in characters and world design it succeeds very well.

It’s worth noting as well that a update to the game adding an option to play the game like the first 2 entries, making counter times more forgiving and letting you focus on the action more as opposed to the souls style game play, this for me gave the game some much needed levity as it felt like Fury wasn’t just weak but was the trickster hero compared to the brute force of War and Death. Her power came from speed and evasion.. which breaks the illusion when you think about her lack of climbing and traversal abilities but hits right in with her primary weapon and fighting style.

I’ve always enjoyed playing different characters doing different things at the same time, while War in the first game has his quest for absolution against being framed for starting the apocalypse, Death had his adventure to try and save him at the same time Fury is tracking down the Seven Deadly Sins, and Strife is also apparently out on his own adventure which we may see one day. It’s a clever setup that I’ve bee enjoying and finally getting the 4 Horsemen together for a scene after 3 games was a nice touch.

I wonder what the future holds for the series, with a even bigger change due for the forthcoming game later on Darksiders III still has in unsure about the overall legacy the game will have. It came out to no fanfare, I had no idea it was coming until it appears on shelves and it seems to have dropped in price quickly… I don’t think it’s quality deserves such a lack of attention but for what it’s worth given the shake up of THQ and the selling off of the games rights the series is back on track, I just hope the story gets to it’s eventual ending in a big fanfare and not a melancholic entry that Darksiders III seems to be… which is it ends up just being something for to match Fury as a character it works but following this trend will just ruin the perceived power of the other Horsemen in the end. For now however is these games interest you Darksiders III is probably worth your time as well.

This site uses Akismet to reduce spam. Learn how your comment data is processed.